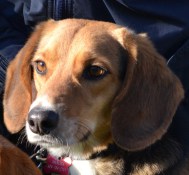 Our beagle bed bug sniffing hunter Scout has been trained to specifically detect the presence of odor of live bed bugs and viable bed bug eggs.

Scout has been scientifically trained by the   J & K Canine Academy (a NESDCA Accredited Training Facility)in conjunction with staff entomologists at the University of Florida in Gainesville, Florida. ﻿

Beagles are recognized as the best breed of dog for scent detection sniffing. Scout hunts with his nose, rather than vision, and he may be able to detect as little as one adult bed bug.﻿

What does this mean for you, the consumer? Simply that Scout is NOT going to alert on dead bugs, empty egg shells, fecal matter, and cast skins. As part of our on-going training and quality assurance program, Scout detects live bed bugs and viable bed bug eggs daily! Because he detects by smell, rather than vision,he may be able to detect as little as one adult bed bug.

﻿Check us out at:

Check out The Bed Bug Hunters on Yelp